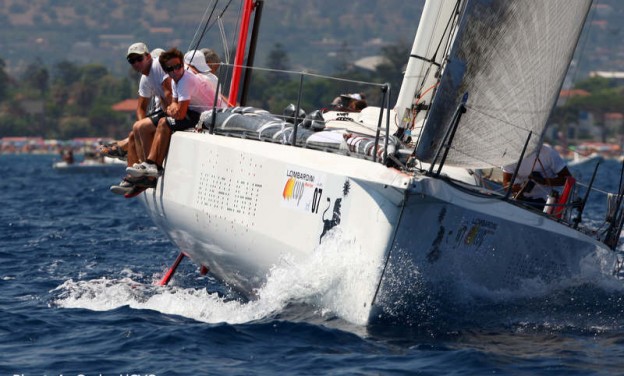 Just to be in the starting line of the regatta was a victory for us.
As any Sailing Anarchy reader knows in the end of June we broke the mast, so in a very short time we needed to understand the problem that caused this failure and built a new half mast. Our friends in Sweden at Marstrom worked in shifts to be able to finish the masttop in time.
Under the ligurian sun we glued the mast together and sailed to Palermo, I will not tell about all other small issues we faced before the regatta, all typical things which happen to a new boat, especially when it is so different as Kuka-Light is.
Palermo-Montecarlo was a strange regatta as there was wind only in the first 6 hours of race. After it we never had more than six knots, often zero knots for hours with hot sun.
Nevertheless the boat performed really fine and in the first hours of race showed its true potential.
We finished third, with the first three boats sailing on completely different routes. So it is not possible to have any real comparison. We hope that in the next regattas we will have more information about our potential compared to other boats.

Warning: Use of undefined constant php - assumed 'php' (this will throw an Error in a future version of PHP) in /home/customer/www/kuka-light.ch/public_html/wp-content/themes/kuka/footer.php on line 1